ThisÂ was an arm that had a PICC line in it and then the docs decided to put an arterial line in the wrist. A few days later the area appeared extensively bruised and when the Vascular Access nurse did a Doppler assessment of the metacarpals â€“ the finger pad pulse on the index finger was absent. Thus the finger that is now black on the tip. Art line was discontinued quietly by the doc and he ordered an ultrasound of the upper arm because â€œthe picc line being in that arm caused this problemâ€ Guess what â€“ no thrombus in the upper arm.

Thanks to Jose Delp 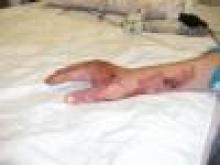